The IBL Game was created in 1995 to allow the players of the Internet Baseball League to continue enjoying a cards-and-dice continuous ownership baseball league, and new versions have been released yearly since its creation. Hopefully, after playing through a game or two, you'll see why the game has thrilled players for over two decades.

To play, you'll need a full set of IBL game materials (Batter, Pitcher, and Park cards, as well as the game charts). These materials will all need to be for the same season. For example, the set released in 2017 contains the players, parks, and weather conditions for the 2016 real-world season. You'll also need three ten-sided dice, marked 0-9, different enough for you to differentiate between them. If you don't have the dice handy, there are plenty of apps or web-based dice rollers which can help. When rolling the the dice, the results, unless noted otherwise, are read as three digit numbers.

Finally, even though The IBL Game is great for single-game play, it's designed for full-season play, and so some of the charts' readings reference league regulations, pitchers resting for a number of games, injuries, and so on. For single games, feel free to ignore these references to full-season play.

Each player will need to select their team, either by picking a real-world team to control, by drafting them from a pool of players, or some other method. In addition, choose the stadium and location of the game. In the IBL, teams may have different stadiums and locations (e.g. One team might have Boston's stadium, but it might be located in the Pacific Northwest).

Once this is done, players should pick their starting pitcher and set their starting lineup based on the pitcher they will face. Afterwards, head to the Weather chart, locate the proper location, and roll two dice for the temperature, two more for the cloud coverage (and an additional two on the precipitation section for cloudy weather, and two more if there is precipitation), then two final dice for the wind type.

Once the game has been set up, you're ready to play! The visiting team starts the game at bat, and will announce their first batter. The defense will then decide whether they want to change their defense by bringing one or more infielders in, by guarding one or both of the lines, by holding one or more runners, or by keeping the infield in its default state. A team may keep its infield as the default by telling the other team their fielders will be automatically set until a runner reaches base; this is also known as “autoset” or just “auto”.

Once the defense is in position, the batting team may attempt to steal a base, bunt, apply a hit-and-run play, or just swing away. If the batting team chooses to swing away or hit-and-run, which will occur most of the time, the batting team rolls three dice. If the result of the dice roll is from 000 to 499, the reading will come from the batter's card, and on a 500 to 999, the pitcher's card will be where the reading will be. Note that each card has two columns, one for facing a righty and one for facing a lefty, make sure to refer to the proper column for the at-bat. 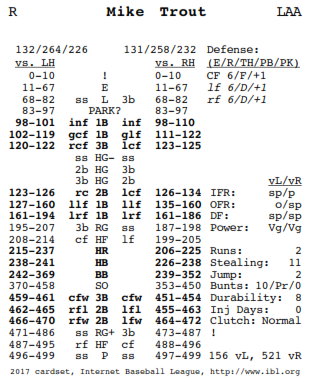 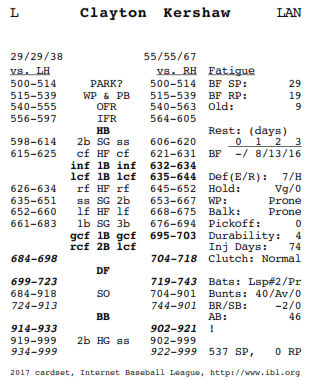 Once you've rolled and found the proper reading, head to the game charts to determine what happens. For example, Mike Trout rolls a 455. Because Trout's facing a lefty, we use the vs. LH column and see that Trout struck out. If Kershaw was a righty, however, it would have been a double down the left field line.

Each player has a set of ratings and reading ranges which come from the statistics, plays, and tendencies that player accumulated in the previous season.

At the very top of all players' cards is their batting or pitching hand, their name, and the abbreviation for the last team they played for in the season the cards represent. Mike Trout is a right-handed batter who played for “League A”'s Los Angeles team.

Below this, at the top of each player's readings columns are three numbers seperated by slashes. These represent the number of hits, times on base, and total bases for each batter's card against that hand. These are analogous to AVG/OBP/SLG slash numbers, and assume all other factors (Park, Error, etc) are at league average. Of the 500 results versus lefties, Mike Trout will average 132 hits, 264 times on base, and 226 bases, and will get 131 hits, 258 times on base, and 232 bases against righties. Higher numbers are better for batters, and lower numbers are better for pitchers.

In the rightmost column, most batters will have one or more positions listed, as well as two or more ratings afterwards. The first rating after the position is the error rating (0-9, higher is better) for use during Error plays, then is the range rating (A-K, closer to A is better, some fielders may have AA or KK which are even more extreme), used in range plays. Catchers and outfielders have an arm rating (-4 to +4, LOWER is better), while catchers also have Passed Ball ratings (using IBL's standard five step rating system: EXcellent, Very Good, AVerage, FaiR, and PooR) and Pickoff ratings (0-9, higher is better). Except when no other players are available, players listed as DH ONLY can not take the field. Some second basemen and shortstops have a + or a - after their Range rating. These are used in IFR results that end in Close Plays, during hg- results, and during rg+ results. A position listed in all-caps represents a player who appeared in at least 24 games at that position, a position listed in lower-case represents a position where the player appeared in fewer than 24 games, and a position listed in italics represents where a player never appeared during the season, but is still eligible to play as a substitute or due to a late-inning defensive move. Positional typography is only relevant in full-season play.

Underneath the Defense ratings are the Hitting Tendencies. A batter's tendency for a plate appearance is their batting hand, plus the tendency for type of reading rolled. For example, if Mike Trout rolled an IFR against Clayton Kershaw, Trout would be an Rsp, then you'd go to the IFR chart and resolve the play using that. If Trout were facing a righty instead, he'd be an Rp for IFR plays. Sp means spray or spread, p means pull, o means opposite field. Just below that is the Power ratings, using the same five-step system catcher passed ball ratings use.

The baserunning ratings are next. Runs represents the player's baserunning ability, with higher being better. This is added to (or subtracted from) things like fielder arm and circumstantial factors (two outs, going to third on a hit to right field, etc) when the runner has a CHOICE between advancing to another base or staying where they are, higher is better. Stealing is base stealing ability, used on steal attempts. This is adjusted by a pitcher's hold rating and a catcher's arm rating, higher is better for base stealers. Jump controls how likely the runner can get a jump to be able to steal a base, or to induce a balk, higher is better. Bunts is a set of ratings showing how likely a bunter can keep a bunt fair, how good a player is at bunting, and how well a player can run to first after a bunt. Higher numbers are better for these, as well, but bunting is for squares.

Durability represents how likely a player is to remain on the field, and Inj Days represents the number of days the player was unable to play due to injury. Higher is better for Durability, and LOWER is better for Inj Days.

Clutch is currently a depreciated rating; it's Normal for all players, and there are currently no instances where Clutch is a factor.

The final rating is a “!”. This represents players who have been caught using illegal performance enhancers, players with run-ins with the law, and other such interesting bits. Most players have nothing here.

Pitchers either have a BF SP, representing their stamina as a starting pitcher, and a BF RP rating, representing relief pitcher stamina, or just a BF RP rating. In both cases, this represents the number of batters a pitcher can face before becoming fatigued. The only exception to this, other than when instructed on charts, comes when intentionally walking a batter. Doing so does not count as a batter faced for that pitcher. The Old rating represents for how many innings a starter can stay, the type of reliever the pitcher is, or both. For more information, consult the fatigue game chart. Clayton Kershaw can face up to 29 batters as a starter, and up to 19 as a reliever, before being fatigued.

Under this is the Rest chart. Kershaw's rest ratings are -/8/13/16. This represents the number of batters a pitcher may face before they must rest. A dash represents a pitcher who MUST rest after any appearance, otherwise a pitcher may appear in consecutive games, as long as the total number of batters faced in those games is less than or equal to the first rating. If a pitcher faces more than the “0” rating in one or more consecutive outings, the pitcher must rest 1 day, and CANNOT pitch during that rest day. If the pitcher faces more then the “1” rating, the pitcher must rest 2 days, etc.

Defense is next, which works exactly like a fielder's defense.

Hold is how well a pitcher can prevent runners from getting a good jump and stealing bases. The standard five-step system is used for the initial rating, then a number is used, with lower numbers being better here.

The WP represents Wild Pitch frequency, with Rare being the best, then Unlikely, Normal, Fair, and Prone. If a pitcher is Prone* (note the asterisk), that means the pitcher is even worse with wild pitches.

Balk is a four-step system, Rare, Unlikely, Common, and Prone.

Pickoff works like a catcher's Pickoff rating. If the catcher and pitcher have the same Pickoff rating, the defensive manager may choose which to use.

Durability, Inj Days, and Clutch are the same as the batter's versions.

Bats represents how well the pitcher can bat. The X-Cards include several pitcher batting cards, for use with non-DH games or leagues, or for extreme circumstances.

Bunts, BR, and SB are the same as batter versions. All pitchers are considered to have a Jump of 0.

AB is the number of at bats the pitcher had during the year.

Under the “!” are the number of batters faced as a starter, and the number faced while pitching in relief.

There are many symbols on the players' cards, each of which refers to a specific situation or play type. Most of the readings are easy to understand from the cards alone, but there are special situations which can occur, so it's a good idea to look at the charts . In addition, it is usually a good idea to read the charts after each new release, as there are subtle, yet important, changes made each year.